The next step to curative beer 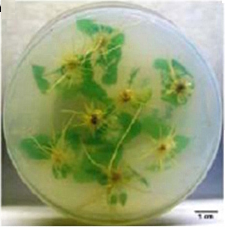 The hop contains several compounds usable in medicine - some of them have also anti-cancerogenic activities. Their concentration in the hop (or a beer) is however very low. Scientist from Biology centre CAS has now discovered a promising way, how to change it.

Several compounds from the hop plant are valuable not only for brewing industry; they have also biomedical potential, such as bitter acids and prenylflavonoids. These compounds possess anti-inflammatory effects, can be used as sedatives or they are able to substitute estrogen deficiency for menopausal women. In recent years, the anticancer effects of prenylflavonoids have been intensively studied. Unfortunately, these curative compounds are in very low concentrations within the hop plants, so some alternative ways to increase their content or yield are considered. Therefore, the attention of scientists focuses on the study of genetic information of hop in order to describe the molecular basis of production of above mentioned curative compounds. During last years the scientists have discovered several regulatory genes (so called transcription factors) that are involved in the control of prenylflavonoids and bitter acids biosynthesis and many attempts have been made to modify such control genes. To date, however, no plants have been prepared clearly suitable for eventual pharmaceutics utilization yet.
The “new hope” is brought now by scientist from Institute of Plant Molecular Biology at Biology Centre CAS in collaboration with Hop Research Institute in Žatec, who have been investigating the curative possibilities of hop for long years and discovered and examined a number of candidate genes, and eventually brought in modifications to the hop genome via transformation technique. They have recently discovered two new transcription factors, which regulate the final steps of bitter acids and prenylflavonoids production. By successful introducing of these transcription factors into hop, these master regulatory factors were able to achieve 40-60 fold higher activation of the genes involved in the production of the active substances in comparison to the original control plants.
And that is not all. This change has influenced also several other genes and metabolic pathways in order to support the curative compounds production. Rigorous analysis of all genes (particularly, their transcriptional profiles) showed that none of the pathways or genes, which have a detrimental effect on physiology, growth and development processes, were induced. Furthermore, the modified plants showed better growth and higher chlorophyll content.
Till now, the plants were grown under regulated greenhouse conditions, thus the scientist plan to evaluate the growth of the modified hop and accumulation of its curative compounds not only in leaves but also in the hop cones, which are harvested and used for the production of beer, in the field-testing conditions next year. Even if these test passed well, there is still a long way to some healing pills or even the curative beer itself. However, it is the promising step to this goal after almost 20 years of world-wide research.