Heavy metals in plants, living organisms and in the environment. This currently highly topical research will be performed by top-ranking German scientist Hendrik Küpper and his team at the Biology Centre of the Czech Academy of Sciences (BC CAS) in Ceske Budejovice. After two years under limited financial conditions, professor Küpper now won a generous grant in the amount of CZK 131.7 million from the Operational Programme Science, research, education, for his research project "Metals, plants, people" and can thus fully concentrate on research work that will bring knowledge used in agriculture, environmental protection and health safety.

Prof. Hendrik Küpper came to the Czech Republic in July 2014 despite major financial problems that occured after the unexpected cancellation of a call from the Operational Programme Research and Development for Innovation (call 2.1.), which was promised to pay for his research. "At the beginning it was very difficult. We had very limited finances and we could do only a small part of the research that was originally planned," says Hendrik Küpper. With the laboratory devices, which he had brought with from his previous working place in the Konstanz University, the scientist established a new Department of Biophysics and Biochemistry of Plants at the Institute of Plant Molecular Biology BC CAS.

Starting research work would not have been possible without the support provided by the Biology Centre. "We have tried to make the best possible working conditions for the professor. We managed to reconstruct several laboratories and equip them with the devices that he had brought from Konstanz. In the meantime we were able to purchase some new devices through small grants, "says Josef Špak, the director of the Institute of Plant Molecular Biology BC CAS. Furthermore, professor Küpper managed to establish collaborations so that his department could do some of the measurements at other institutions within the Czech Academy of Sciences and also in Germany and Great Britain.

Also the original Küpper´s five-member team was put to the initial severe test. Since the establishment of the department, the entire team altered, except of a young scientist Dr. Elisa Andresen, who came with Professor Küpper from Konstanz. Now it is formed, besides Prof. Küpper and Dr. Andresen, by scientist Dr. Archana Shaik, technician Joao Manoel and project manager Josef Kubin. The team, which is now completely international and has already brought many foreign contacts, will increase through the new grant by 6 additional full-time scientific workers and part-time jobs for the administrative team. 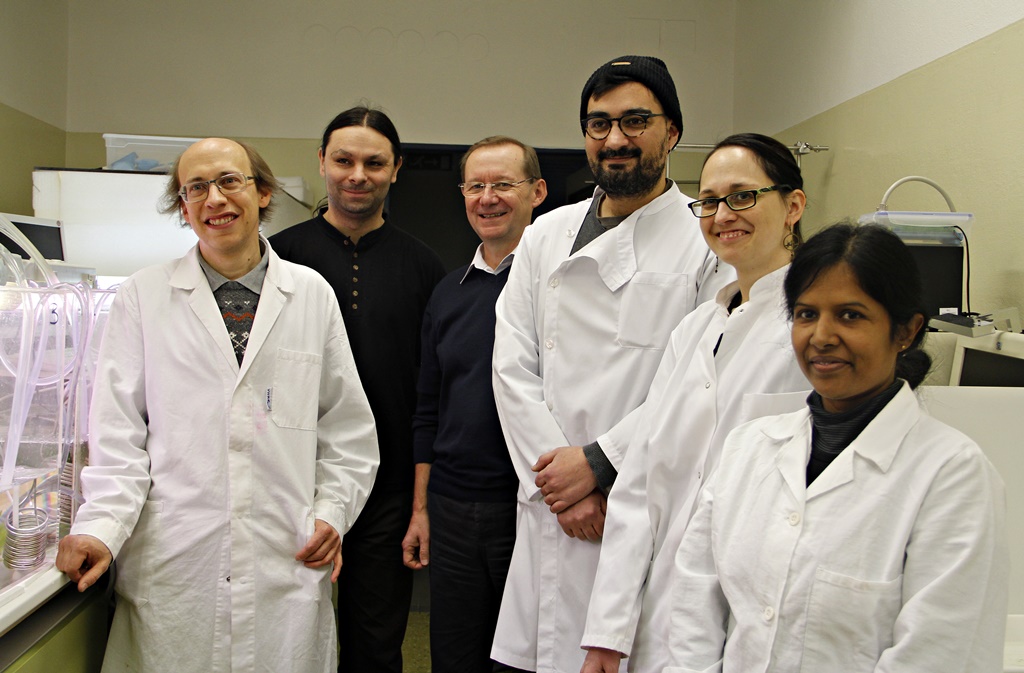 With the new grant Professor Küpper obtained 131.7 million CZK for research until 2022. Approximately CZK 60 million of this amount will be used to purchase special equipment. One of the most expensive devices (15 mil. CZK), an ICP-MS Spectrometer for measuring ultra-low concentrations of metals, will become the heart of a new Ultratrace analysis Lab. The laboratory will be open to cooperation with researchers, government and industrial companies. This is assumed to increase the interest in the analysis of metals in various areas of biological research, and thus the lab will have a great impact in the region beyond the research of the Biology Centre.

"It is a good feeling, because now we can really do the research and expand the team and equipment according to our original plans," says Hendrik Küpper.

The research is generally focused on metals acting on plants. Plants absorb metals such as copper, chromium, cadmium, iron, manganese, rare earths, zinc or the metalloid arsenic from the environment, because many of these metals are needed for the proper functioning of cells. Also animals, including humans, require these elements, so that the metal content in plants is essential for all human nutrition (directly by eating plants or by eating animals that eat plants). However, at the same time, already very small concentrations above the requirement of these elements may become toxic and cause serious environmental and health problems.

Küpper´s team research the metabolism of metals, i.e. how plants absorb metals, how they transport, store and use metals, and how they deal with deficiency and toxicity of metals. In the future, the scientific results may contribute to more effective environmental risks estimates as well as to improvements in agriculture (better targeted fertilization and crop breeding) and last but not least, phytoremediation, ie. the technologies that use living plants to clean up the polluted soil and water resources contaminated with toxic metals. Knowledge of the biochemical and biophysical mechanisms in plants will also help to understand the function of metals in other organisms, including humans.