How does toxic arsenic accumulate in plant cells? 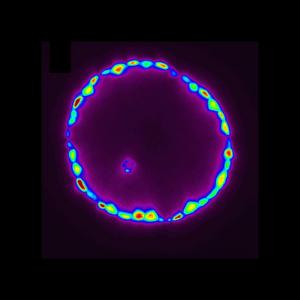 Arsenic is highly toxic not only for plants, but also for animals including humans. It naturally occurs in soil in non-lethal concentrations ranging from 0.01 to 3 micromols per litre. However, when its concentration increases to 5 micromols per litre the situation becomes to be serious. The increase can be caused by both human activities (mining, etc.) or natural processes (erosion, floods, etc.) - particularly in the Indian subcontinent, even higher values can be measured. A first step to find a sustainable solution for this problem is to reveal the mechanism of arsenic toxicity in environmental-like conditions.
Such an important first step has been achieved by the team of professor Küpper (IPMB) in a project that was set up in Küpper’s group by Seema Mishra (now at the National Botanical Research Institute in Lucknow, India). Hornwort (Ceratophyllum demersum), a submerged floating plant was chosen as model species. It is plant well known to aquarists and at the same time a good indicator of metals. To determine distribution and movement of arsenic in the plant, it was needed to follow it by literally micrometer accuracy. To fulfill this task, the most powerful and tightly focused X-ray source in the world had to be employed - PETRA III storage ring in German electron synchrotron center (DESY). Till 1978, PETRA III was the biggest particle accelerator, then it served as pre-accelerator for a much bigger accelerator, and finally it was converted to a machine being able to create X-ray beam up to 5000 times finer than a human hair.
Using only this instrument it was possible to determine the fate of arsenic in plant cells. Surprisingly, it came to light (or to x-ray? :-)) that arsenic initially accumulates in the cell nucleus. With increasing concentration it also pervade to vacuoles, the other cell compartments and to the other cells. This is a key finding for explanation of arsenic toxicity. Part of arsenic toxicity can be due to its binding and blocking of cell enzymes. If arsenic accumulates in nucleus, however, it can directly be incorporated into DNA instead of similar phosphorus, and by that way it can directly cause genetic mutations. It may seem to be a tiny difference when looking at the final result - the death of the cell. Nevertheless, for principle of cell functionality this difference is substantial. The scientist are now preparing other tests to prove this mechanism in other plants and putative ways how the cells can eventually protect themselves against arsenic.